The History of the NYS Big Buck Club 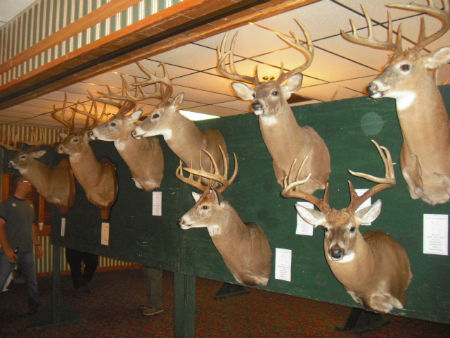 During the 1930’s, Clayton B. Seagers, a wildlife biologist with the New York State Conservation Department, turned his daily work with whitetails into his hobby; locating New York State big bucks. With the help of his friend Grancel Fritz, who developed the Boone & Crockett scoring system, Seagers began measuring and publicizing the big bucks he located during the 1930’s and 1940’s.

When Seagers published a pamphlet to accompany the big game license in 1941 the seed was sown for a Big Buck Club. Seager’s pamphlet explained to hunters how to measure their buck and asked them to contact the Conservation Department if the buck was unusually large.

Following a strong response, Seagers published the photos of the ten best heads of New York in the ‘46, ‘52 and ‘63 CONSERVATIONIST. Interest in the trophy whitetails died out however after Seagers retired and nine years passed before anyone began to locate, score and record New York’s whitetails.

Bob Estes, a Boone & Crockett measurer from Caledonia undertook the task of holding scoring seminars and putting together trophy displays for various county fairs. This exposed sportsmen to what big deer really looked like and publicized the ones that had been located and scored.

Estes’ concept of a New York State Big Buck Club was finally brought to reality with the help of John B. Brown, a newspaper writer, and a small group of sportsmen. Estes met with Herb Doig and Wayne Trimm of the Conservation Department in March of 1972 to finalize how the Big Buck Club would operate. Wayne Trimm, a world famous wildlife artist, offered to paint a portrait of the largest buck taken each year in New York. Wayne is responsible for much of the Club’s early success as the two painting he presents each year to the lucky hunters that tag the largest gun and archery buck are published in the CONSERVATIONIST. This keeps the Buck Club, its awards program and the outstanding deer in the public eye.

The club has grown since 1972 with Bob Estes as an enthusiastic but low key president who, along with his wife Sally, have devoted countless hours explaining, measuring, promoting and defending the Club. At the March 1987 scorers meeting Bob passed the office of president over to Jim Massett, a measurer and avid deer hunter from Madison County. Bob wanted to get back to keeping track of the records for New York’s big deer and the stories that go along with them. In 1991 Massett passed the presidency to Brian Dam, B&C scorer and outdoor writer. Charles Alsheimer of Bath, a hunter, and very well known wildlife photographer and outdoor writer with DEER & DEER HUNTING undertook the task of editing the first six years of records and, in 1978, with the help of Paul Daniels, a fellow measurer from Steuben County, published the first edition of the New York State Whitetail Record book. It contained a listing of 350 trophies. Charles also edited the second edition in 1980 which contained 472 trophy listings. The third through tenth editions were edited by Brian Dam, measurer and Big Game Editor for the NEW YORK SPORTSMAN magazine. Original artwork and paintings used on the covers have been created by Mike Stickney and Michael Graham. Besides being an accomplished wildlife artist Stickney worked in the Big Game Unit at the Delmar Research facility and is presently in charge of the Reynolds Game Farm in Ithaca. Stickney has provided artwork and illustrations used in the CONSERVATIONIST, WHITETAIL DEER ECOLOGY AND MANAGEMENT, the NEW YORK SPORTSMAN, and other publications. Subsequent editions featured photography of both deer and bear by John Palmer, a wildlife photographer, taxidermist and deer hunter from Rome, New York.

For the 25th Anniversary issue, we returned to an oil painting for both covers. This original art was done by Michael Graham of Caledonia who has won numerous awards for his work having been selected as the 1987-88 New York State Ducks Unlimited artist of the year and the National Wild Turkey Federation Grand National Winner in 1994, 1995 and 1996.

The highlight of Club activities occurs when regional scorers host the Annual Awards Banquet. This event always occurs on the third Saturday in September. The site moves frequently so all of New York’s deer hunters will have an opportunity to attend. Bob Estes orchestrates the program presenting the lucky hunters, their deer and the stories of how they were taken. All regional Big Buck Club entrants are invited to bring their trophies as well as statewide entries from the previous fall. The program provides an opportunity to view one of the most comprehensive collections of big deer seen anywhere in North America.

There have been two Boone & Crockett measuring schools held in the state, one in 1988 and another in 1998 that were taught by Jack Reneau. The schools hosted attendees from across the US, Canada and Mexico and has increased the number of B&C scorers in New York. Because of the increase in trained B&C scorers, which are certified to measure bear and are able to train new Buck Club scorers, the Club’s scorers voted to include Black Bear in the record listing at the March 1989 meeting.

Membership in the Club has grown tremendously from Seager’s idea in the 1930’s that would show sportsmen New York’s big deer into Bob Estes dream of a Big Buck Club. The Club is now an incorporated, tax exempt organization whose sole purpose is to maintain the records of New York’s trophy deer and bear.

Back to Home Page from History